Skip to Main Content
It looks like you're using Internet Explorer 11 or older. This website works best with modern browsers such as the latest versions of Chrome, Firefox, Safari, and Edge. If you continue with this browser, you may see unexpected results.

"On June 19, 1865 — nearly nine decades after our Nation’s founding, and more than 2 years after President Lincoln signed the Emancipation Proclamation — enslaved Americans in Galveston, Texas, finally received word that they were free from bondage.  As those who were formerly enslaved were recognized for the first time as citizens, Black Americans came to commemorate Juneteenth with celebrations across the country, building new lives and a new tradition that we honor today.  In its celebration of freedom, Juneteenth is a day that should be recognized by all Americans. And that is why I am proud to have consecrated Juneteenth as our newest national holiday." (U.S. Department of State, 2022).

The Meaning and Importance of Juneteenth

Articles from the library's databases:

Books from the library's collections: 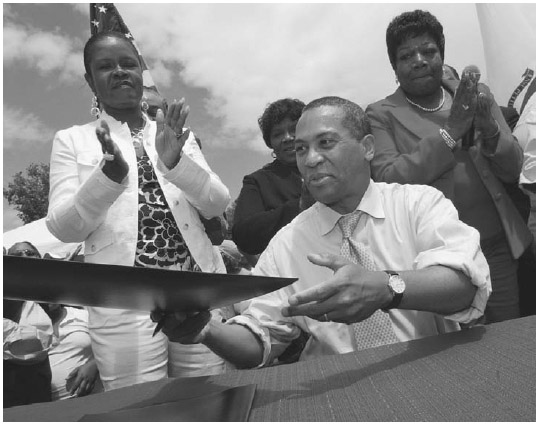 Deval Patrick (center-right), governor of Massachusetts, hands over a bill he signed into law to honor Juneteenth, a commemoration of the end of slavery in the United States. State Senator Dianne Wilkerson (left), and State Representatives Willie Mae Allen (center-left) and Gloria Fox (right), lead sponsor of the bill, applaud the legislative acknowledgment of the ritual of Juneteenth. AP IMAGES/LISA POOLE.